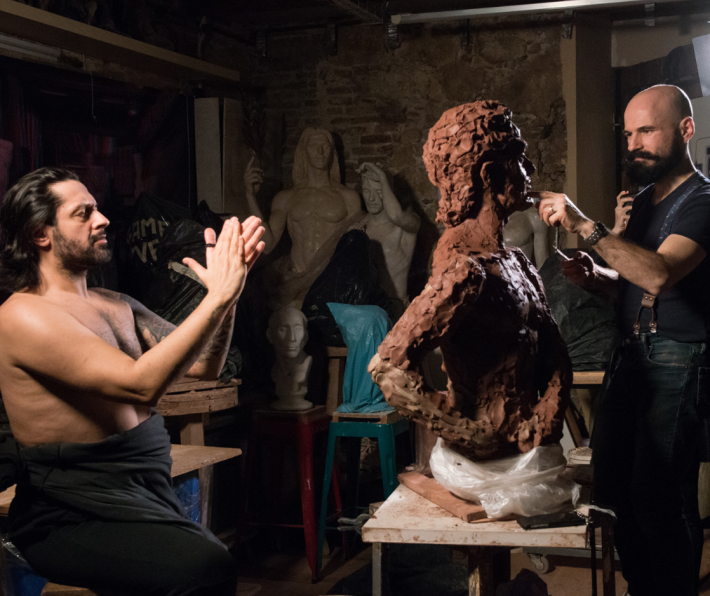 Jorge Egea, president of the ICRE, will inaugurate at the Museu Europeu d'Art Modern (MEAM) in Barcelona an exhibition of his recent work based on the dance of bailaor Rafael Amargo.
The inauguration will take place on April 20

Inauguration open to the public free of charge under prior reservation. To receive the invitations and confirm attendance, you have to fill out the form by clicking on Ticket.

When Rafael Amargo appears on stage, he transmutes into the demigod Dionisio. He is no longer a man, but a character that attracts our desires, our looks and subjugates us.

From this possession of Dionisio-Amargo, a series of works was born in which Jorge Egea plastically recreates the dance born from the dance that the whole company stages on the Roman Theater of Mérida. The set is complemented with a posteriori reflections, images in which Egea captures moments of universal pathos latent in the dance of Amargo through drawing and sculpture. All this under the silent complicity of the photographer Consuelo Peris who provides a vast report, link between both artists, as well as between dance and sculpture, capturing the ephemeral moments of the performing arts.

The merit of the Amargo show is knowing how to collect an arcane root, if born from the gypsy flamenco cradle, and graft it into the tree of life of Greek myth. Dionysus makes us constantly verify that the Greco-Roman vision is not only white, rational (apollonian), but on the contrary, that the ancient Greek genius would not have given rise to art (and even less to the classical) without that fruit of the grape that fermented in wine and ambrosia, in nectar for the gods and in madness or poetry for actors, dancers, playwrights or artists.

That Dionysian spirit gives Egea's work a sense of transience, of provisionality, of embarrassment, of non-finite in small and large formats: sculptures, notes made in situ, study drawings ... together with part of the costumes and photographs of the work, forming the collection that can be visited in the MEAM from April 20 to May 30.